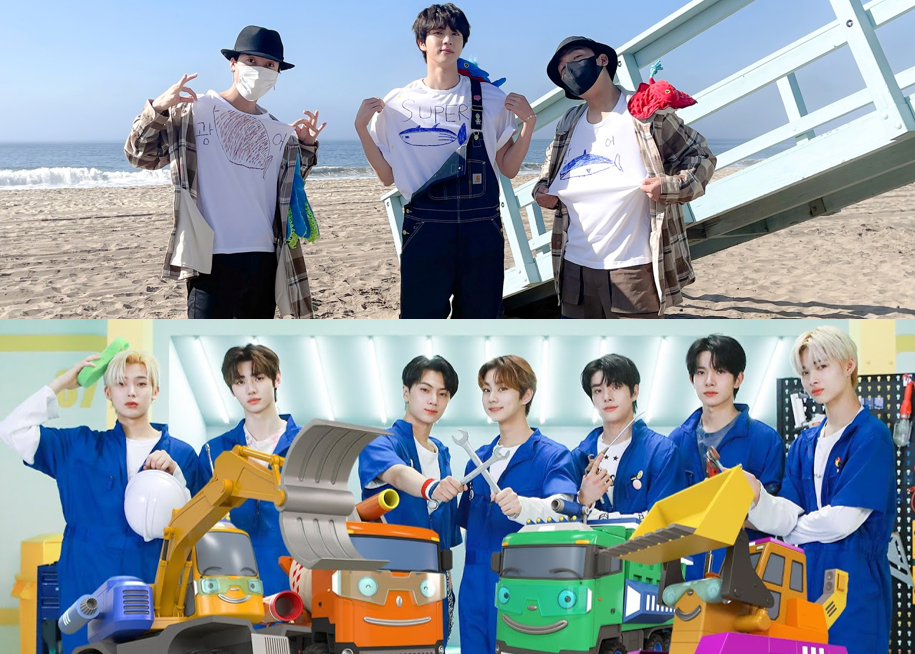 Indeed, great songs and influential artists draw attention from babies to the elderly!

Are you planning on introducing K-pop to the kids? Here are some kid-friendly K-pop songs that little ones might like!

After cutting vampire and werewolf elements in their songs “Given-Taken” and “Drunk-Dazed,” ENHYPEN surprised ENGENEs when they collaborated with the Tayo children’s TV show.

Fans appreciated this energetic and vibrating song because it reminded them of their childhood. The group of septets was also appreciated for the exciting choreography of the song, paired with fresh and colorful clothes that made the children love the music by singing and dancing along with it!

According to reports, the music video for this first collaborative song became famous among South and East Asian kids and teens, making fans look forward to more ENHYPEN collaboration with other children’s shows.

Moving from little boys riding a hoverboard to tight-knit young men flaunting motorcycles in the Ridin music video, Pinkfong’s collaboration with NCT Dream is one of the unexpected collaborations in the K-pop industry!

Known for the release of Baby Shark, Pinkfong and NCT Dream, the collaboration began when NCT’s third unit released their version of “Dinosaurs A to Z,” which was initially sung in 2014.

In this song, the singers of “Hot Sauce” curved the pronunciation of dinosaur names, which was appreciated by Internet users, as some commented that even native English speakers have difficulty pronouncing.

In 2022, the boy band reunited with Pinkfong’s REDREX when a new version of “Baby T-Rex” was released, followed by a child-friendly version of their second studio album title, Glitch Mode.

3. “After school” of the weekly

Unlike ENHYPEN and NCT Dream, which have collaborated with children’s programs and entertainment services, Weekly’s After School was considered by fans to be released for children as an after-class song.

Girls are seen as “buddies” who meet “after school” as they dance together, skate together and take selfies, which are everyday and close experiences that children encounter when they finish a busy school day.

In addition to the storyline of the music video, kids fall easily into this song because of the Weekly casual clothes that shine with an overall cute and crisp vibe.

TWICE’s “Candy Pop” perfectly portrayed the group’s appeal. Reportedly, this song is made for children because of its percussive style and the “sweet” vibes in the opening songs.

More importantly, the music video suits the interests of the kids as TWICE were the anime characters in the show the girl is watching. In this release, fans applauded Japanese animation culture twice in the music video, bringing the concept and style to children’s hearts and tastes.

Unexpectedly, BTS Jin held a worldwide banquet, launching “Super Tuna” in 2021. As the oldest member of BTS is addicted to fishing, he made a “light” and “positive” song that featured his favorite hobby.

Without thinking the song would hit the charts and go viral regardless of the age of the audience, it has become a universal anthem.

Kids dancing to Super Tuna as if it were a new shark is the sweetest thing ever 😭#SuperTunaDanceChallenge pic.twitter.com/C8ddrIo4cz

Thanks to the fun song that alternates with the trot, kids all over the world could not help but produce their dance covers of the song!

What other K-pop songs remind you of your childhood? Comment these below!