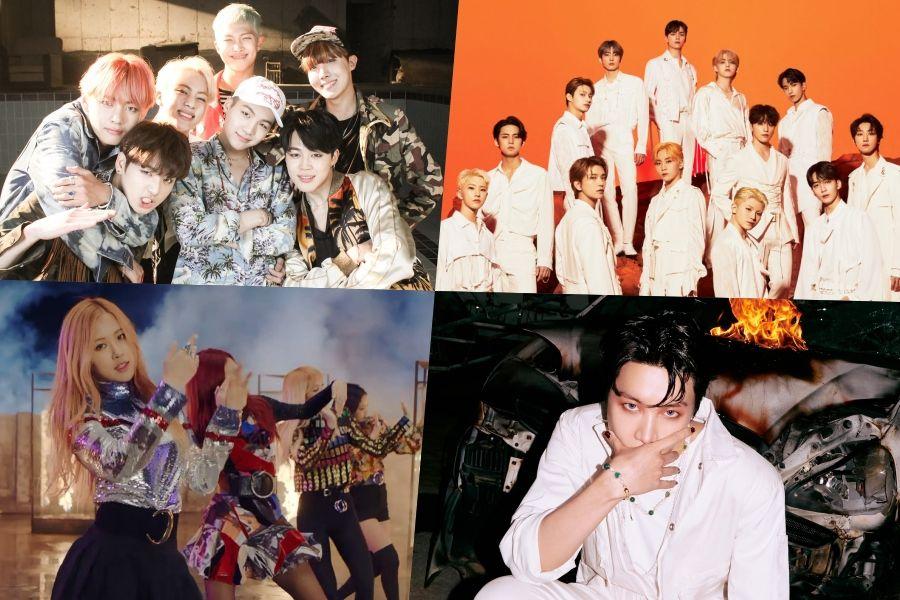 If there’s one metaphor that K-pop stars love, it’s fire. Whether they sing about lighting the stage with their fiery passion or igniting the past, you can be sure that your favorite bands have incorporated this into their music at one point or another. Here are seven K-pop songs that really pump up the atmosphere!

We’re being beaten by “HOT” SEVENTEEN from their album “Face The Sun” earlier this year, and boy, are they setting fire! From a feisty music video with blazing fireworks and a scorching desert sun, to incessant siren-like electronic chirps, this song is sure to have you instinctively fanning yourself on even the coldest days!

If there’s one song that has burned out to any K-pop fan, it’s BTS’s “FIRE”. Their roaring song of “fire” swallows everything in its path throughout the song, as if encircling the world on fire as BTS ignites the scenes with their iconic choreography. If you’re looking for a song that will make you feel unstoppable, this is it.

On a softer (but equally burning) note, “HWAA” (G) I-DLE (which has the dual meaning of both “fire” and “flower”) is a brilliant smoldering piece about leveling a painful past to the ground. Earth. The captivating slow burning builds up in the atmospheric “HWAA”, occasionally reviving and perfectly capturing the destructive but regenerating power of fire.

In “PLAYING WITH FIRE”, BLACKPINK fuels the uncontrollable flames of love, comparing a risky romance to a mesmerizing fire from which they cannot take their eyes off. Their worlds burst into flames in the stunning music video for the song, showing how love, like fire, can be as captivating as it is dangerous. I think when everything is on fire all the red flags look like flags?

The usually bright J-Hope shines in a completely different way in his solo piece “Arson”, his disturbingly minimalist instrumentation brings to light a more dark and sinister side of his typically sunny personality. “Burn it, burn it, burn it, burn it, burn it,” he raps in a menacing, rumbling tone that slowly grows more urgent with a feeling of quiet but unstoppable rage. J-Hope’s “Arson” is the perfect soundtrack for those days when you just feel engulfed in fiery anxiety.

ASTRO takes on a darker, more passionate sound in “Blue Flame”, borrowing in its lines fiery Latin pop. Another slower song, this song is perfect for lighting up even the darkest nights, if not with lyrics, then with the group’s sensual vocals.

Who could forget 2NE1’s OG “FIRE”? Hailing from one of the fiery K-pop groups of all time, this infectious dance track is sure to set the roof on fire at any dance party. From mermaid-like singing to the immersive “eh eh eh eh eh eh eh, 2NE1” songs you’ll be singing and dancing to this iconic debut single in no time!

Which of these fiery K-pop hits is your favorite? Tell us about it in the comments below!

Gladys Yeo is a long-time fan of K-entertainment and a student of Media and Asian Studies. Outside of school and writing, she can be found listening to groups of K-pop girls or trying (and unsuccessfully) to control their two home corgi. Feel free to hit her on Instagram or Twitter talk about drama, music and life!

Currently addicted to: Billie’s “Balance of Perception: Chapter Two”, “After LIKE” IVE
We look forward to: the return of LE SSERAFIM and Dreamcatcher!