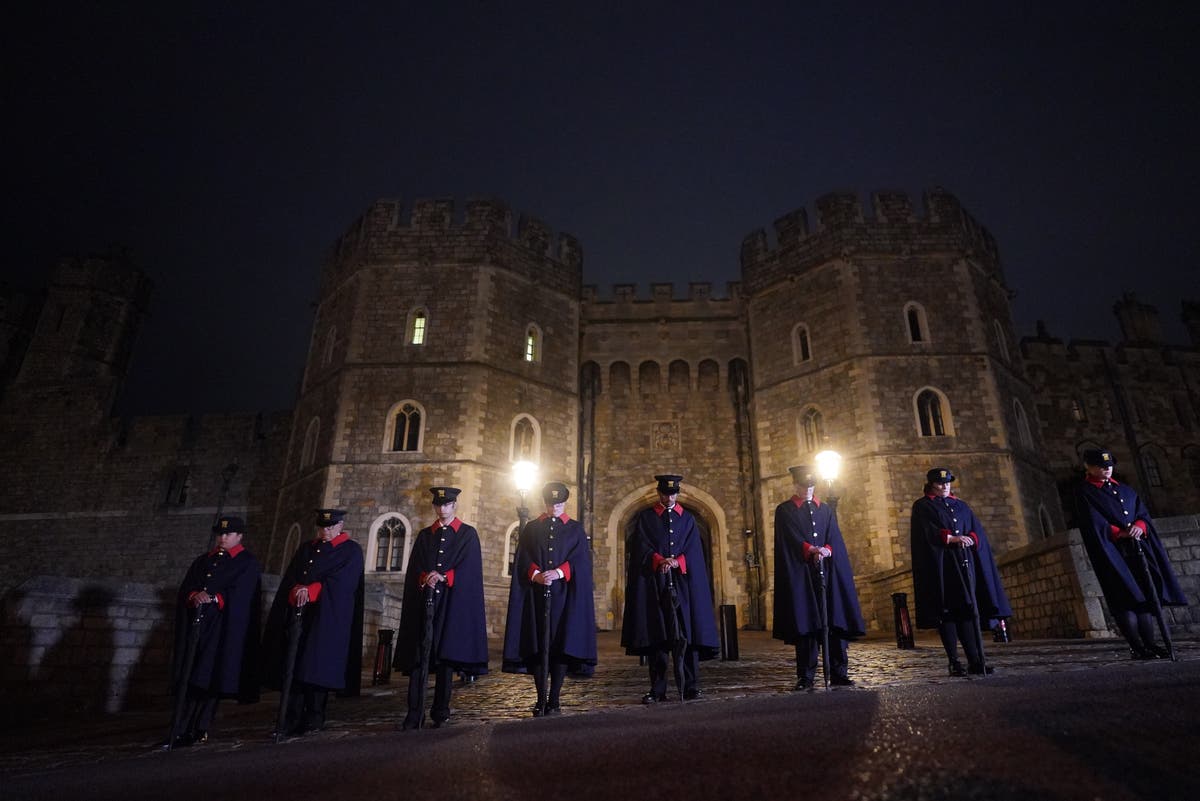 The British kept a minute’s silence to mourn the Queen’s death before her state funeral.

On Sunday at 8 p.m. there was silence in the country to commemorate the deceased monarch, and people celebrated the occasion privately in their homes and at community events and vigils.

Liz Truss stood outside 10 Downing Street with her head bowed during the national moment of reflection, and people from all over the country followed suit.

However, Big Ben didn’t hit before and after the silence as originally planned due to a technical problem.

A spokesman for the British Parliament said: “We investigated it urgently and identified a minor technical problem that has now been resolved.

“We will test the bell again tonight, and we are confident that it will not affect tomorrow at the state funeral procession.”

We could hear the mourners clapping and cheering after the silence was over.

It came when presidents, prime ministers and royalty from all over the world arrived at Buckingham Palace for a party organized by the king.

About 500 guests attended the event, including the Prime Minister, US President Joe Biden and First Lady Jill Biden, and French President Emmanuel Macron, joined by his wife, First Lady Brigitte.

The Prince and Princess of Wales and other working members of the Royal Family, including the Earl and Countess of Wessex, the Royal Princess and Vice Admiral Sir Tim Laurence, and the Duke and Duchess of Gloucester, joined Charles and the Queen consort in mingling with the guests.

The party was also attended by several dozen leaders of the Commonwealth and members of foreign royal families.

Kate had previously held an audience with the first lady of Ukraine, Olena Zelenska, at the palace.

“You were lucky to have had her for 70 years, we all have been. The world is better for her.

The President of the United States and his wife also visited Westminster Hall to see the Queen in state.

Security was tight, and road crossings were closed prior to his visit to pay his respects as rumors spread in the crowd about the imminent arrival of Mr. Biden and his entourage.

Members of the public continued to join the queue for the last day on Sunday evening, with the deceased monarch’s coffin to stay until 6.30am Monday.

The Department of Culture, Media and Sports said the estimated waiting time is at least eight hours, up from 14 hours earlier.

Previously, people were warned not to leave their homes to join the line as it is due to close later.

When asked about reports he was “backed on” to let Chinese delegates into Westminster Hall, he told the BBC in Sunday With Laura Kuenssberg: “Nobody relied on me at all. Far away from here.

“My view remains the same that we would not be welcomed to Parliament. And then I stopped the ambassador and accredited the Chinese from entering the House of Commons.

“So let’s be honest, having a party in the House of Commons when the MPs and some are sanctioned is unacceptable. My view remains the same and nothing has changed.

“The sanction against these accredited officials remains and will remain so. The answer is very simple.

“Lift the sanction, we can also check to see if we should have a pick-up in Parliament, but that will not happen at the moment.”

However, a Chinese delegation came after comments to Westminster Hall, standing on the platform to watch the coffin.

Neither the Ministry of Foreign Affairs nor the Parliament of the United Kingdom were able to confirm the names of the participants.

Meanwhile, Camilla paid a television tribute to the late monarch by recalling her “wonderful blue eyes” saying, “I will always remember her smile.”

The Queen Spouse also shared personal memories of the Queen who saw the funny side of the shoe mishap on her wedding day.

Speaking of the occasion on April 9, 2005, Camilla said: “I remember coming from here, Clarence House, to go to Windsor the day I got married when I probably wasn’t firing all cylinders, quite nervous and for some Z for some unknown reason, I wore a pair of shoes and one had an inch heel and the other had a ten-centimeter heel.

“So I mean the hop-a-long talk and there’s nothing I can do. I was halfway in the car before I knew it, and you know, she saw and laughed at it and said “look sorry” and she had, you know, she had a good sense of humor.

This happened after the Prime Minister on Saturday began meetings with world leaders, talking to his New Zealand and Australian counterparts.

At 10am on Sunday morning, Irish Prime Minister Micheal Martin entered Downing Street for a “warm” meeting with Ms Truss to discuss “many issues in the context of British-Irish relations” before leaving less than an hour later.