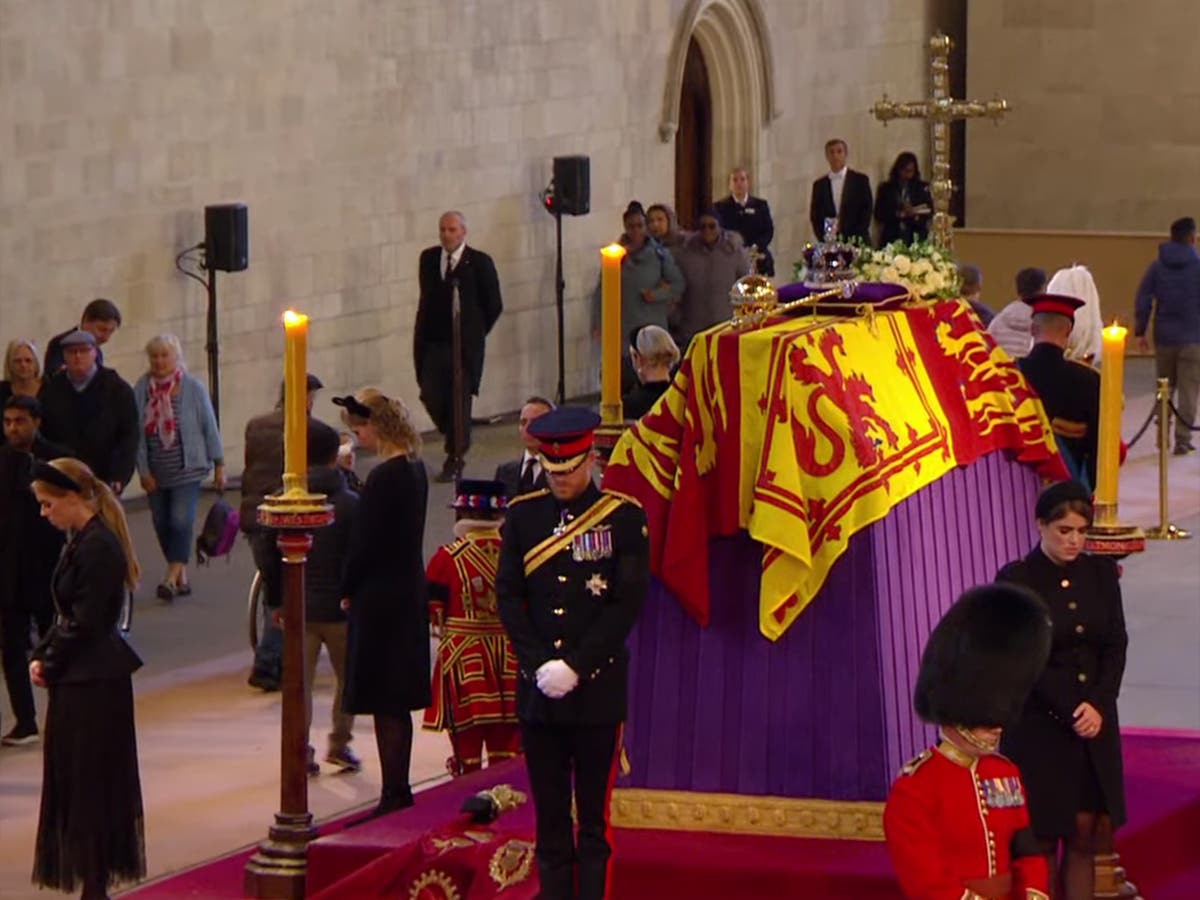 Prince William conducts a ceremonial vigil at the coffin of his late grandmother, Queen Elizabeth II, along with his other seven grandchildren as she lies in the state of Westminster Hall.

The Prince of Wales was joined by his brother, Prince Harry, ahead of the state funeral of the late monarch on Monday 19 September.

Immersed in thought and private contemplation, their heads bowed as people passed by.

Standing in the gloomy silence as they bade the Queen personally, the future king was surrounded by his cousins ​​Zara Tindall and Peter Philips at the head of the coffin, while the Duke of Sussex stood shoulder to shoulder with Princesses Beatrice and Eugenia at his feet.

The Queen’s younger grandchildren, Lady Louise Windsor, 18, and her brother James, Viscount Severn, 14, stood in the center of the coffin for a 15-minute vigil.

Members of the public could be seen filling up on either side of the coffin, which was draped in the Royal Standard and topped with an Imperial State Crown and a sphere and scepter.

William wore the No.1 Blues and Royals uniform, a garter sash, a garter star, gold, diamond, and platinum anniversary medals, and an RAF pilot’s wings.

In a significant departure from previous dress issues, Harry – who is no longer a working member of the royal family – joined his brother in wearing his uniform at Westminster Hall, who has so far been denied the option of wearing his military outfit when mourning in public.

The Duke of Sussex wore the Blues and Royals No.1 uniform, the Order and Star of the KCVO Neck Order and Star, the Afghanistan Operational Service Medal, gold, diamond and platinum anniversary medals, and the Army Pilot Wings. According to royal sources, King Charles III decided to grant the youngest son permission to wear the uniform for vigilance.

Harry, who was an army officer on the front line on two missions in Afghanistan, previously wore civilian attire during official events, including walking behind his grandmother’s coffin on Wednesday when he was transferred to an ancient hall for lying in state.

Other family members watched from the side during the vigil, including the Count and Countess of Wessex.

The queen’s eight grandchildren finally emerged from a room led by the Prince of Wales, followed by his cousins, with Harry at the back.

After the members of the royal family left the hall, the stream of mourners again began to pass past the queen’s coffin.

This comes after the new monarch and his siblings have kept their own vigil at their mother’s coffin on Friday.

The king was joined by Prince Andrew, Princess Anna and Prince Edward, who stood over the queen’s coffin yesterday evening.

This is the second such “Dukes’ Vigil” that the deceased Queen’s children have had since her death last Thursday at age 96, and the first was when she was lying in state at St Giles Cathedral in Edinburgh on Monday evening.