“Immortal Songs” Bada consoles Ailee, who lost her mother “I was on stage in mourning” 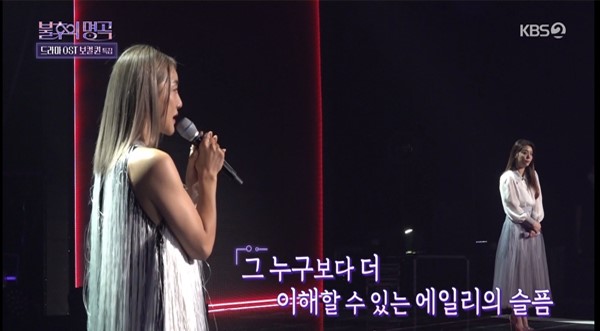 Ailee was the ultimate winner of “Immortal Songs.”

The popular OST dramas were presented on the KBS 2TV entertainment program “Immortal Songs”, which aired on September 17th.

Ailee, who was the fourth runner that day, cried out when she remembered her late mother after Lim Young-woong’s “Love Always Run Away” stage. Seeing this, Lee Bo-ram sympathized with Ailee’s feelings, “It was hard to hold back the tears. At the end, Ailee said, “It would be nice,” and the words were so painful. I felt a lot in those words. “

Ailee, who had stopped crying, later told the story of a recent telephone conversation with her grandmother in America. She made viewers cry by revealing “I told my grandma not to cry. I am in the position of a daughter who has lost her mother, but it is difficult for my grandmother because she misses her deceased daughter ”.

Bada, who was Ailee’s opponent in the fourth round, first comforted Ailee before the competition. Ailee said, “Like Ailee, I have the experience of sending my mother to heaven while standing on the stage. I was on the stage at KBS during the mourning period. As I mentioned that day, my love for my mother is great. My mom can see feelings from heaven that I couldn’t convey due to time. In response, MC Shin Dong-yup added: “This is the stage at which, apart from competition, you can feel beautiful feelings between seniors and juniors.”

Ailee defeated Bad, Lim Jeong-hee and Park Min-hye in rounds 4, 5 and 6 to achieve 3 wins in a row and ultimately win the final title.

Ailee expressed her feelings about winning as well as her ambitions, “I’ll work harder in the future.”