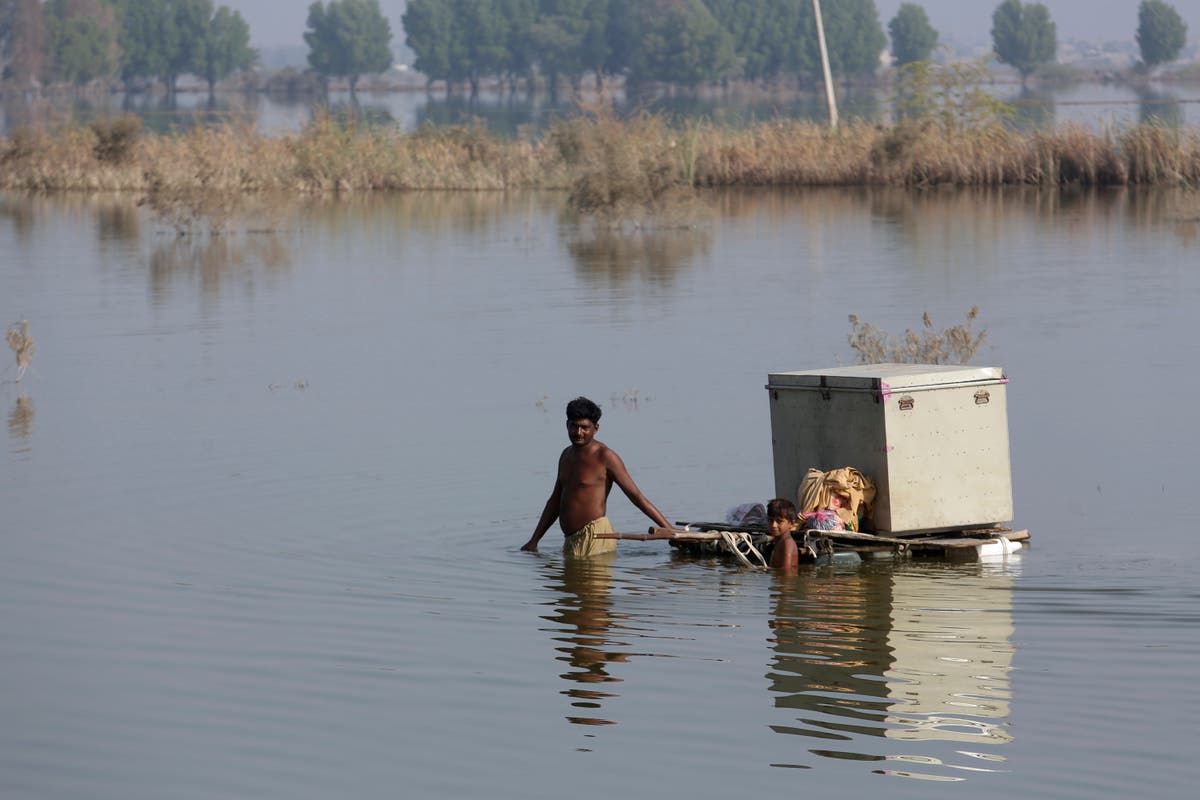 Maryam Jamali should be preparing for her economics exam. Instead, a teenage girl from Pakistan’s flood-stricken Balochistan province helped set up maternity clinics and a shelter for those underserved as part of humanitarian efforts.

Balochistan is Pakistan’s largest and poorest province, plagued by underdevelopment, misgovernance, corruption and prolonged insurgency. When catastrophic floods inundated vast swathes of Pakistan this summer, about 75% of the population of Balochistan was affected, the highest proportion of any province in the country.

However, recovery here has been slower, and residents say they are paying the price for years of neglect by local and central government. Bureaucracy makes it difficult for international relief workers to reach devastated areas. Much of the already damaged pre-flood infrastructure has been washed away, making relief efforts even more difficult.

People are still wading in waist-deep water or rafting in the fields of Balochistan. The potholed and suspension-destroying road to Jamali village features deep ruts dug out by desperate locals to release trapped flood waters. It is an inconvenient car journey through flood-affected areas in the voivodeship, although not so impossible or inaccessible that it is the reason for the slowness of aid.

This is in contrast to the neighboring province of Sindh, an agricultural, commercial and manufacturing hub. At the height of the flood, residents of the Sindh town of Sukkur used boats on the flooded roads. But pumps were brought in to remove the water, and now there is little indication that the city has ever been flooded.

Balochistan was not so prepared, despite frequent disasters. There were severe floods in 2010 and 2011. The arid region usually receives little rainfall, but any rain in this mountainous area can cause flash floods.

Jamali, her father and dozens of volunteers have helped more than 20,000 flood survivors since mid-June.

“We haven’t seen only international organizations come here,” said 19-year-old Jamali. “Maybe they think it’s a scary place. No, it’s just a lack of effort on their part. It’s hard to get through the bureaucracy. Because of all these obstacles, they just didn’t come here this time.

A drainage canal near her village illustrates what locals believe is infrastructure protecting Sindh at the expense of Balochistan.

Water from the city of Gandakha in Balochistan is to be discharged through a canal towards Sindh. But only one of the canal’s five gates is open. The cement seals the rest. Someone wrote in Urdu “For God’s sake, open it” on one of the walls of the canal. Jamali said the flood flooded the city at one point.

Balochistan is not a political or economic power and does not have a political patron like other provinces. Sindh is the power base of the Bhutto dynasty. Punjab is home to the former and current prime minister and accounts for the largest share of Pakistan’s GDP, while Khyber Pakhtunkhwa is the stronghold of former prime minister Imran Khan.

Although Balochistan is Pakistan’s largest province, it is the least populated and consists mainly of high mountains. It is also a center for a small ethnic Baluch minority who say they face discrimination from the central government. This fueled a separatist insurgency demanding independence.

The government says it has largely suppressed the rebels, but the violence continues, with frequent air strikes by security forces and counterattacks by the insurgents. But the nearest hotspot is a few hours’ drive from the flood-affected areas.

Local politician Sana Baloch claims that flood relief has focused on Sindh and that there is a closed door policy in Balochistan, unfairly using the insurgency as an excuse.

“International agencies and groups are willing to support people, but they are not welcomed by the federal government,” Baloch said. “They are not encouraged or allowed to come here.”

But there was also criticism of local authorities for doing little even as the scale of the crisis grew.

In the Sohbat Pur district, Muhammad Ismail is rebuilding his dilapidated house while his family lives on the side of the road.

“Nobody came here to help us,” said Ismail, a 28-year-old father of five. “We drained the flood water ourselves – without any machines – from this patch of land, so we have a place to sit.”

An official from Balochistan’s disaster management authority, Naseer Nasir, said the central government provided sufficient funds which were distributed locally. He also said that authorities had forwarded people’s complaints to the provincial government.

Pakistani charities’ tents can be seen in flood-affected areas. Due to bureaucratic obstacles, foreign NGOs work with local organizations that do not need permits to operate, said Huzaifa Rafique of one of Pakistan’s charities, Baitussalam.

Abdul Shakoor of another charity, AlKhidmat, said it had hosted at least 90 different foreign delegations. He said some international NGOs are afraid to travel to Balochistan for security reasons.

The lack of social development in the province only exacerbates the effects of the disaster. Poverty forces people to live in floodplains, and illiteracy prevents them from adapting to the effects of climate change, Rafique said.

While the province receives tens of millions of dollars in development work — the World Bank had a $250 million portfolio there as of 2019 — its human development rates are abysmal. The maternal mortality rate is 298 per 100,000 live births, the highest in Pakistan. Its literacy rate is around 40% and 40% of the population live in poverty, the worst rate in the country. Patchy information about Balochistan at local, national and international levels means that accurate and up-to-date data is scarce.

“The difference between an educated person and an illiterate person in everyday life is that he knows how to get help, he knows how to plug into the setup,” says Shakoor. “In the coming years, the focus should be on the education of Baloch children.”

The prospects for permanent rehabilitation are bleak; Jamali says one Gandakh resident has been living in a relief tent for 12 years, since the 2010 flood.

“It’s not the same tent, it’s his second one, but he’s still in the tent,” she said.