Our Newest Idols in New York: KCON 2022 US Tour 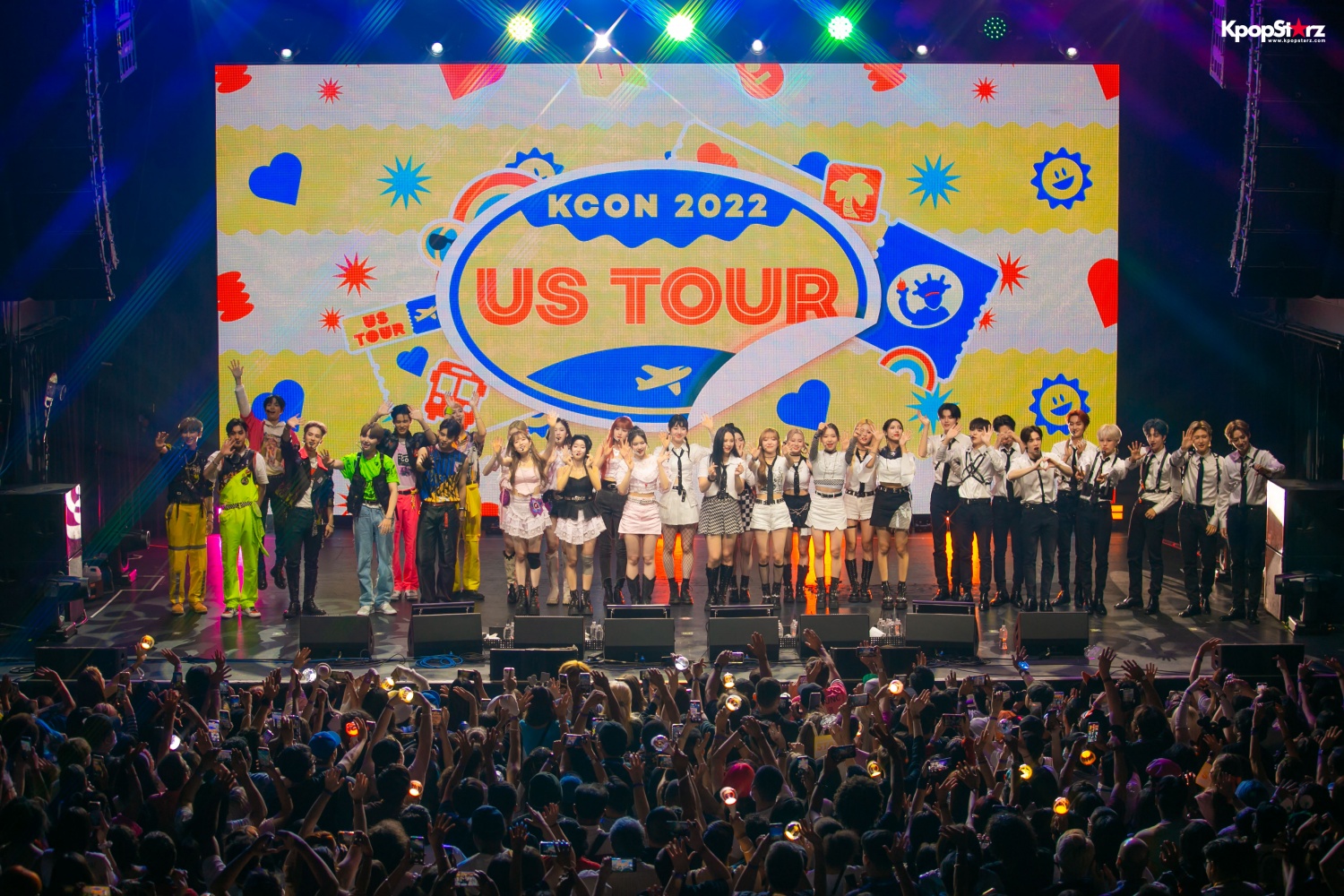 [Note: If you’re having trouble viewing the photo slideshow above, please open this article link in your phone’s internet browser app or on your desktop.]

It was the beginning of September and we celebrated the start of the careers of four amazing K-pop groups at the New York stop KCON 2022 US TOUR! The return of KCON’s personal shows after years of virtual events from the COVID-19 era was long-awaited and the hype was beyond belief. Fans lined up for hours in front of Terminal 5 in New York on September 1, eager to dance and sing along to their favorite songs LIGHTSTUM, CRAVITY, TO1 and STAYC!

As Terminal 5 filled with participants, the pre-show video of each group teaching the audience some of their point choreography got everyone excited ahead of time! LIGHTSUM taught “Q”, CRAVITY taught “JUMPER”, TO1 taught “What A Beautiful Day” and STAYC taught “ASAP” – although most of the audience was already familiar with STAYC as the song became popular on TikTok after it was released. Fans even chanted the iconic “STAYC girls, it’s falling!” together, setting the stage for these newcomers to take over.

Let’s dive into our performance summaries KCON 2022 US TOURfour novice monsters! (In the order they came on stage, of course – if we tried to line them up, we’d have four newcomers labeled “1.” They’re all just that good.)

1. LIGHTSUM lights up the stage!

LIGHTSUM started the night taking us into space: the scene turned into a cosmic one and the girls’ dance scene showed its otherworldly skills! “Vanilla” showed how cute the girls were, making the entire Terminal 5 sing “Vanilla-nilla-nilla” along with them. “VIVACE” lit up the stage with its blooming summer beat! LIGHTSUM has proven that the strength of rookies lies in their versatility in how they seamlessly switch between cute vibrations and incredible power in each verse.

In the next episode, LIGHTSUM harnessed his girlfriend’s energy by performing a cover of “TOMBOY” by the (G) I-DLE senior group. While their first songs showed how incredibly sweet they are, their mesmerizing control over the stage pushed the boundaries of sass! LIGHTSUM’s audacity and sweetness didn’t stop there: for their taste, they called on fans to pick a member to show off their dancing skills! After endless cheers, fans chose Jian and Juhyeon to show the point choreography, who shyly accepted the challenge. Their shyness is gone immediately as soon as they dived in the dance – really dancing queens.

“Q” and “ALIVE” closed LIGHTSUM’s set, allowing fans to sing and wave along with them! (If you weren’t SUMIT before the show, you definitely became SUMIT after seeing how cute they are.) 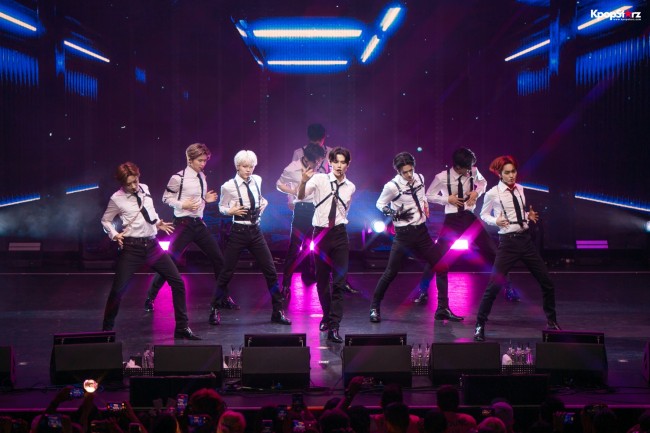 2. CRAVITY raises the bar in its queue!

The vision in sleek shirts, slick black pants, and assorted harnesses made it hard to guess that CRAVITY is the hottest spy team as easily as you might guess, a bunch of budding K-pop boys – and they stole our hearts like that. easy as spies would! “ADRENALINE” started its segment, and the captivating rhythm (in addition to their dancing skills, smiles and unforced presence on stage!) Made our hearts beat faster.

Vocalist and lead dancer Wonjin started their next song “My Turn” with a smirk and an energetic “What’s up guys?” The song was full of CRAVITY’s effortless dancing skills and charisma from start to finish. Hyeongjun head dancer was the perfect finisher!

After CRAVITY’s first performances, Taiwan-born and LA-raised Allen took the lead, welcoming LIGHTSUM back to the stage to introduce the group! All members introduced themselves individually – LIGHTSUM sharing with enough aegyo to fill the entire Terminal 5 with smiles, and CRAVITY lit the venue with a loud “What’s going on?” In true New York style of performance, the members couldn’t get through the period without singing “Empire State of Mind!” Jay-Z and Alicia Keys! CRAVITY’s Jungmo took control by asking fans which stage they prefer (and it almost broke some more awesome stages!)

On the CRAVITY stage, they pumped up the energy with NCT 127’s “Kick It” and Stray Kids’s “Back Door”. The energy of the songs perfectly translated into the dances of the debutantes of spacecraft, easily moving from formation to formation. Taeyoung member expressed his dreams in the next mentality: for the next generation of debutants to admire them and cover their songs!

After teaching the audience the lyrics and dance moves of “JUMPER”, they jumped into the energetic song, proving to everyone that they had the energy up. The horns, beats, drums and synthesizers of this track have come together for a full experience of creativity and gravity (a combination of the CRAVITY of the same name!)

CRAVITY’s last song, “Boogie Woogie”, was the perfect joyful anthem for the party, bringing both summer and their set closer. The boys were silly, loving and quick-witted as they partyed and danced all night long – special cheers on the way Wonjin led the fans to wave and move, taking the center of the stage while dancing. 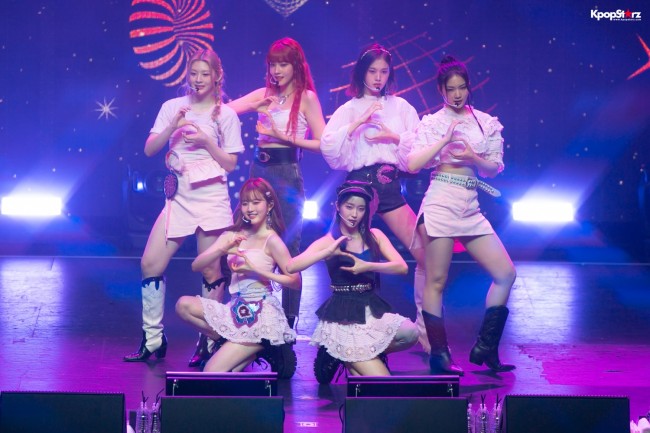 With the number of fans cheering and singing STAYC’s songs even before the girls from High Up Entertainment hit the scene, it was no secret which rookie group got the most hype. As soon as the previous groups LIGHTSUM and CRAVITY introduced the next performers, the whole hall burst into cheers and the loudest shout of the cult “STACY Girls, falling down!” you’ve ever heard! (It may have dropped off, but the hype only started from there!)

Their opening performance “RUN 2 U” came with an eruption of hearts as each fan danced to engaging choreography. “SO BAD” continued the love as STAYC took Terminal 5 with them on a journey full of otherworldly, eclectic and synchronized dance moves!

During their show, STAYC presented themselves equally sweet and sexy – Yoon in particular charmed the audience with his spin!

In the next episode of the show, STAYC returned to the stage with “ASAP”. Yoon asked fans to shout “ASAP” as loud as they could, and the entire Terminal 5 delivered and danced to the iconic “ASAP” choreography! The sleepy beats and dance of this song put us all in a trance. We are very happy that STAYC (and their excellent performances and the sweetest me!) Appeared in front of our eyes. 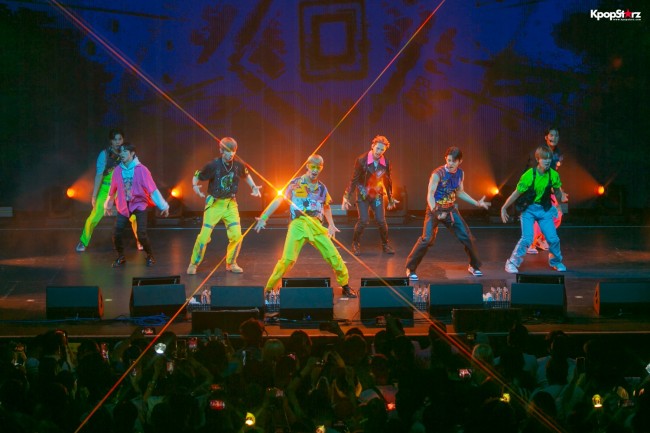 TO1 was the oldest rookie among rookies (debuting on April 1, 2020, just two weeks before CRAVITY’s debut!), And the presence on the stage that the boys developed thanks to participation in the reality show “To Be World Klass” showed! A group of nine appeared on stage in neon streetwear, dancing to a deep, drumming electric song – their skill level, their sharp movements filled the stage with energy, as if they were a complete dance group!

“No More X” and “BOOM POW” called TO1 in New York! Vocalist J.You felt like a siren as he led the bridge with impeccable riffs. Lead dancer Kyungho’s solo dance break made our hearts beat even harder!

Another TO1 performance segment was greeted with even more cheers for “What a Beautiful Day!” Even though Chan, one of their members, was unable to attend KCON, it was still a beautiful day for TO1 to meet its fans – and the song was the perfect way to celebrate. After teaching the audience point choreography, the musicians jumped into the show, bringing great vibes to every moment with their bright and springy movements.

Leader Jaeyun asked the fans for a word to describe their performance, and fans offered “Slay”, causing screams and laughter throughout the venue. “Make some noise if you think killed”Jaeyun asked, and Terminal 5 got even louder!

Their next songs, “Son of Beast” and “Drummin”, raised the volume of cheers to the very end. higher level, exceeding our expectations! The funky rhythms of the synthesizer “Son of Beast” enveloped the stage with warm light, while the cacophony of the unique sounds of “Drummin” made us all dance.

At the end of the evening, all the newcomers – LIGHTSUM, CRAVITY, STAYC and TO1 – returned to the stage for one final bow. While the show in New York closed KCON 2022 US TOUR as the last stop, it showed a beautiful start to a successful career for these debutants. We can’t wait to see them grow and shine even more (and make their safe return to the New York concert stages!)