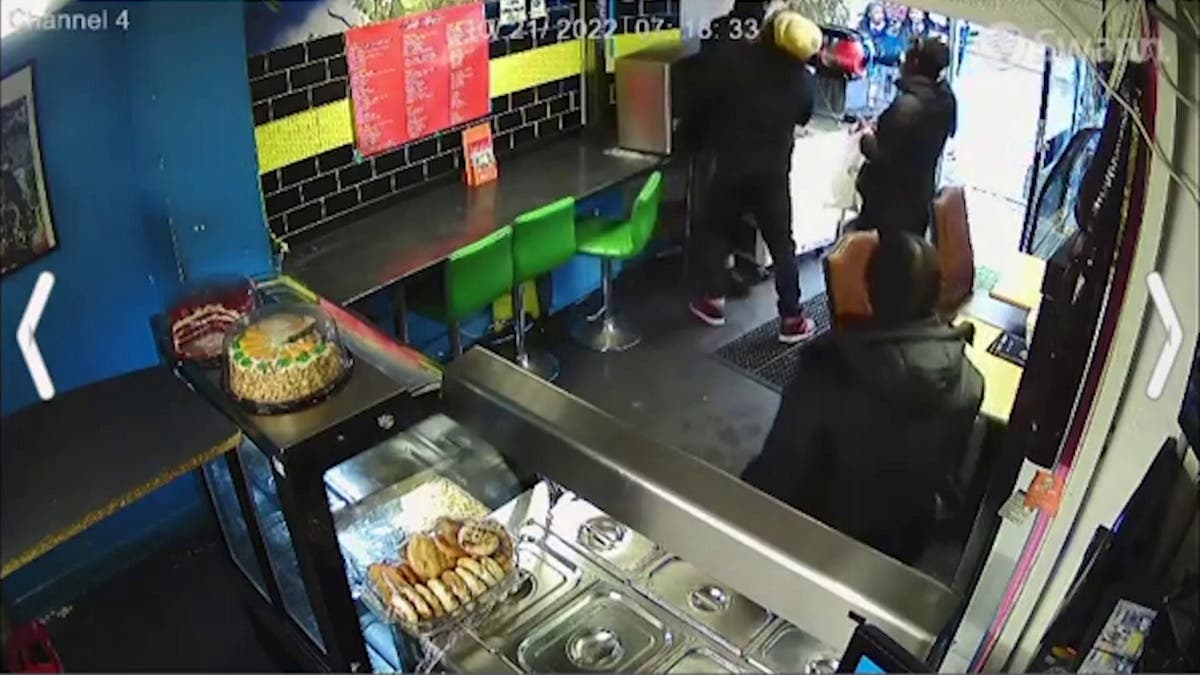 CCTV shows the moment a restaurant owner struggled with a knife in his shop a year after his 14-year-old son was stabbed to death.

A man was threatening a girl at a Caribbean grocery store when restaurant owner Julius Cools stepped in to remove a machete-length knife.

Last November, Mr Cools’ son Jermaine was fatally stabbed near West Croydon railway station, in connection with which a 16-year-old boy was arrested and charged.

At 14, Jermaine was the youngest person to be stabbed and killed on the streets of London in 2021. Thirty teenagers have lost their lives this year, setting a grim record for teen homicides in the capital.

CCTV footage from October 21 shows Mr. Cools fighting with the assailant. The pair roll onto a set of chairs and tables before Mr. Cools yanks the blade away from the man and tells him to leave Cools Kitchen on Portland Road in South Norwood.

Despite the shocking nature of the incident, he said police did not seem interested in seeing the CCTV footage.

Describing the incident, he said: “I was in my shop, a girl came in to buy something, asking about food, and he came in so angry and arguing that I realized it was getting out of hand.

“I tried to separate them, I pushed the guy away telling him to get out of my shop and realized he had a knife.

“I don’t know where I got the energy from, but I just got it. He could have stabbed me, I don’t know.

“It’s a good thing she came, otherwise he might have attacked her in the street.”

Mr. Cools said he confiscated the knife from the attacker who had asked for it back.

In the video, he is seen arguing across the counter before giving up and leaving.

Mr Cools said: “All I thought about that day was that the girl could have died the same way [as my son] in my shop. I did it to protect this girl, she was only 16 or 17, she had her whole life ahead of her.

“We live in a world where when you leave your home, you don’t know if you’ll come back. This is the life we ​​live now.

“All I’m telling people right now is beware, kids and adults, anyone can die anytime, any day.

Jermaine Cools was stabbed to death on London Road, Croydon on November 18, 2021 following reports of a fight between a group of people. Despite the efforts of medical staff, the 14-year-old died.

A Metropolitan Police spokesman said: “Police were called at around 4.20pm on Friday 21 October following reports of a man in possession of a knife who entered a restaurant on Portland Road, SE25.

“Officers attended the scene but the man left the scene.

“The person in the store was spoken to – he was not injured. He did not want to get involved in police intervention, but reported that the incident was captured on CCTV.

“CCTV of the incident was observed but the man could not be identified.

“The investigation is closed at this time, but any further information will be properly assessed and investigated.”