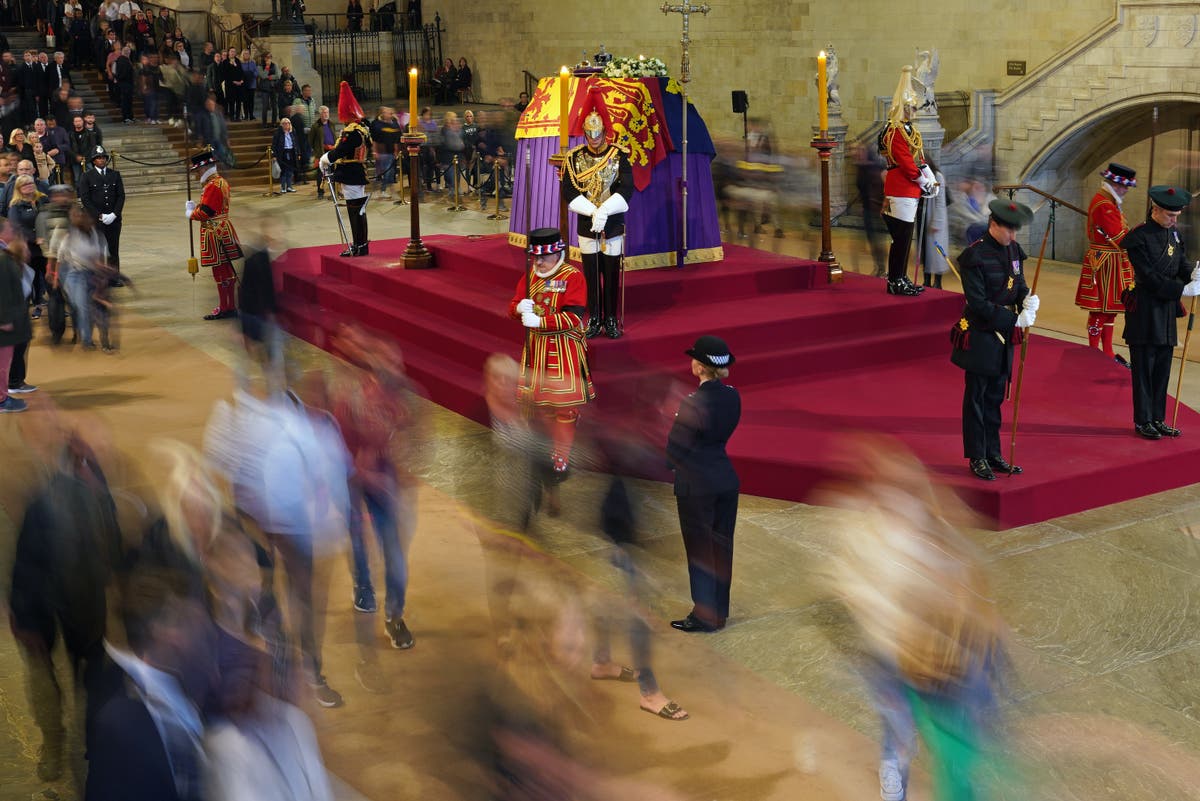 The line to visit the coffin of Queen Elizabeth II, which rests in the catafalque at Westminster Hall, was finally closed ahead of Monday’s state funeral.

The Queen has been in London since Thursday evening, with huge lines of mourners winding along the River Thames waiting to wait at least 14 hours.

The line closed on Sunday at 10:45 PM pending a ceremony where the deceased monarch will be transported from Westminster Hall to Westminster Abbey and finally to Windsor Castle.

Mourners were scheduled by 6:30 a.m. Monday morning to reach the coffin, but were warned that it might be closed early to ensure that as many visitors as possible could enter the ancient hall before Her Majesty’s recumbent period ended.

Announcing the queue closure, the Department of Digitization, Culture, Media and Sports (DCMS) tweeted: “The queue for the meeting in Her Majesty’s State is now exhausted and is now closed to new entrants.

“Please do not try to join the queue. The stewards will be managing those who are already nearby. Thank you for your understanding.”

When the last mourners reach the queen’s coffin, the doors to Westminster Hall will be closed in preparation for the procession to Westminster Abbey, where a state funeral service will be held.

As of 4:00 PM on Sunday, the waiting time in line was at least ten hours, the DCMS reported today.

He also called on people this morning not to go to the line to “avoid disappointment.”

Coverage of the line to Westminster Hall was broadcast by companies such as BBC and Sky News.

Many famous faces were seen in the winding line waiting to pay tribute to the Queen before her funeral.

David Beckham earned praise for his 12-hour public queue appearance after joining for the first time on Friday at 2am.

Meanwhile, some media representatives and MPs were able to skip the line and enter Westminster Hall as its doors opened to the public on Wednesday.

On Sunday, President Joe Biden and First Lady Jill Biden visited the coffin of Queen Elizabeth II as part of his trip to pay tribute to the late monarch.

At 7.30 p.m. on Friday, September 16, King Charles III, the Royal Princess, the Duke of York, and the Earl of Wessex held a vigil as members of the public.

The next day, Prince William conducts a vigil at the coffin of his late grandmother along with her seven other grandchildren at Westminster Hall.

Transport for London (TfL) says it is gearing up for tomorrow so that around a million people can set a route in the UK capital, as millions view the service worldwide.