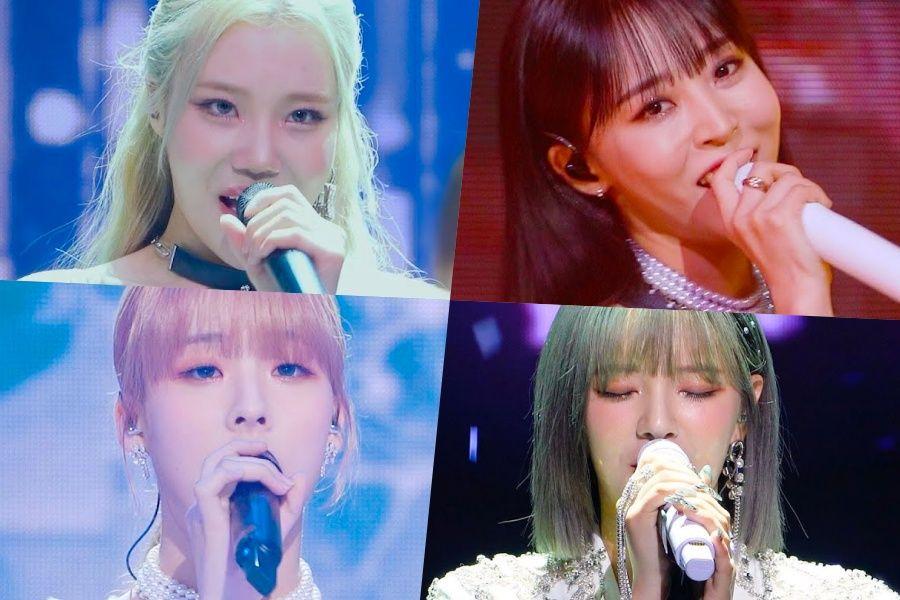 “Second World” announced the results of the 1st round!

JTBC’s “The Second World” features eight talented female rap women from a group of girls who fight in a vocal competition to break the prejudice that rappers lack vocal talent. Participants include Yubin, ex-Wonder Girls, Shin Jimin, ex-AOA, Moonbyul from MAMAMOO, Mimi from Oh My Girl, Exy from WJSN, JooE from MOMOLAND, Moon Sua from Billlie, and Kim Seonyou from CLASS: y.

Last week, the contestants officially kicked off the first round of one-on-one singing duels with battles between Yubin, Shin Jimin, Mimi and Exy.

On the September 13 broadcast, Moonbyul faced JooE and Moon Sua against Kim Seonyou to complete the first round matches. Finally, the final rankings for the round have been announced.

Wanting to adequately show how hard she had worked during the 12 years as an intern, Moon Sua emphasized some of her vocal skills by performing BTS’s “The Truth Untold” with orchestral accompaniment.

For the song that describes it best, Kim Seonyou chose Younha’s “WINTER FLOWER” and filled the stage with her powerful voice.

The votes of the voice readers were split three to two with Kim Seonyou as the winner. She shared her excitement: “After my debut, I’m performing alone for the first time. I am very happy and grateful for such good results. “

Moonbyul and JooE took part in the final battle of the round. Although JooE initially felt pressure after being chosen as Moonbyul’s opponent, she shared a different perspective, saying, “It’s actually better. It’s exciting if the underdog wins.

Moonbyul explained that she wanted to perform on “The Second World” to show off her singing, but was also impressed with her bass, guitar and percussion skills during the performance of “Congratulations” DAY6.

Unfortunately, eight days before the competition, JooE was diagnosed with COVID-19, leaving her only one day to practice after being released from quarantine. As a result, JooE had to practice her Domino performance of Jessie J herself at home. In addition to these difficult circumstances, JooE encountered many obstacles during rehearsals but remained strong to finish her show well.

Ultimately, Moonbyul won all five readership votes and tearfully commented: “I felt a lot of pressure because MAMAMOO is a vocal group. Everyone was saying such nice words and I thought that in the future I would have to sing with a lot more confidence. Thank you so much. “Considering how emotional she was, Moonbyul explained:[I realized] I live well. I tried this and that myself, but I thought I was taking a good step forward and that’s why I think I cried. “

The final ranking of Round 1 is as follows: