Watch: Ju Yeon gets struck by the memories of Seo Ji Hoon after crossing paths with Kim Min Kyu in the upcoming youth drama 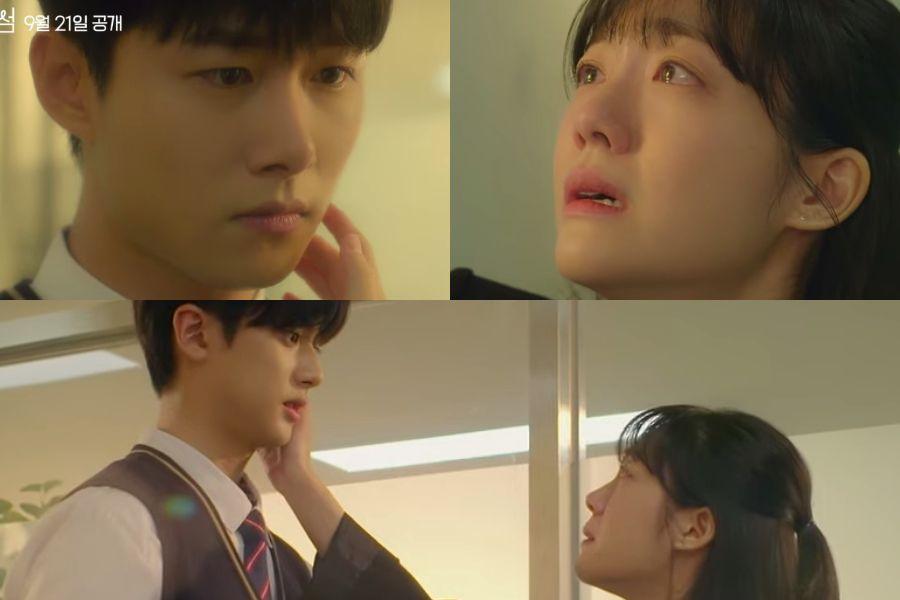 So Ju Yeon will have to come to terms with her past wounds in Seasons of Blossom!

Warning: mentions of suicide below.

Wavve’s original drama “Seasons of Blossom” tells the story of the love and friendship of 18-year-old Seoyeon High School youth. An omniverse style story focuses on a different main character for each of the four seasons. The drama is based on a webtoon of the same name that has been serialized on Naver Webtoon since June 2020.

Seasons of Blossom will present the butterfly effect that occurs when an incident from six years ago in which a boy commits suicide and a girl who is unable to stop him begins to influence today’s teenagers living in the present. The story will also highlight the fears and development of young adults who cannot be honest and hide.

This new trailer follows the events of today after Han So Mang meets Lee Jae Min, the younger brother of her first love, Lee Ha Min. Han So Mang arrives at the school she hasn’t been to in six years, and her smile fades when she sees Lee Jae Min. Someone says, “He moved last year. After what happened to Ha Min, he moved with his mother to the countryside. Han So Mang approaches Lee Jae Min and asks him if he wants to be a model for her drawings. Lee Jae Min agrees, but is also on a mission to find out about his brother’s death.

As Han So Mang spends time with Lee Jae Min, he can’t help but remember his memories with Lee Ha Min. She says, “My memories with you are so clear that I am still alive in this time.” The images of the Lee brothers overlap and she starts crying as she touches Lee Jae Min’s cheek, calling out Lee Ha Min’s name. Han So Mang’s voice continues, “So I’ll try to draw you again.” The clip ends with Lee Jae Min asking, “Please tell me about my brother.”

Seasons of Blossom premieres on September 21 at 5:00 PM KST. Watch the full trailer below!

Check out another trailer here: