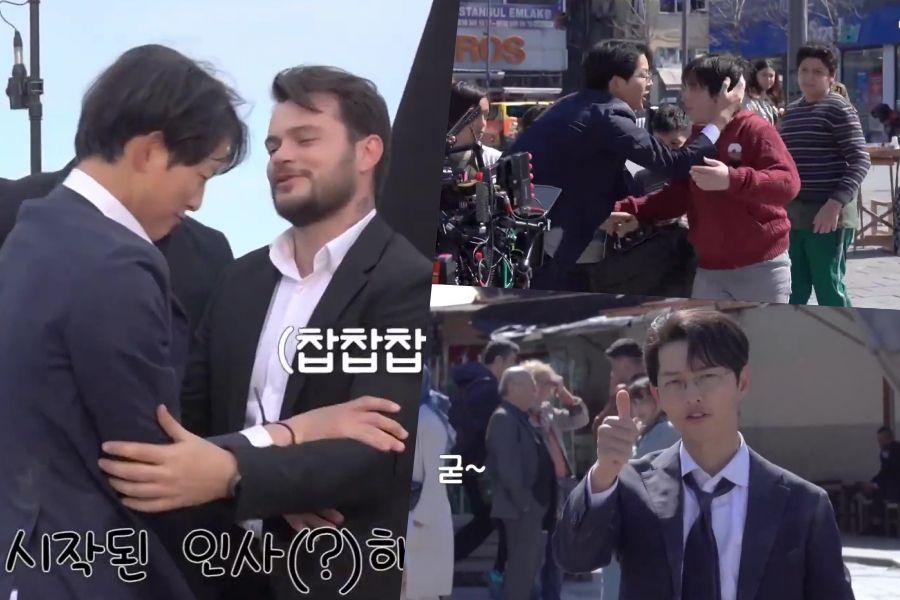 On November 21, JTBC released a video of the making of “Reborn Rich”, announcing their first overseas shoot in Turkey.

The clip begins with Song Joong Ki warmly welcoming the foreign actors who will be shooting scenes with him that day. When they finish shooting the chase scene, Song Joong Ki and the other actors gather in front of the camera screen to monitor their performance together. To make the chase scene more realistic, Song Joong Ki gives an idea. After checking the shooting results, the director and the rest of the staff applaud and praise the even more realistic action scene made possible by Song Joong Ki’s suggestion. Song Joong Ki continues to encourage everyone, including the supporting actors, with smiles and hugs until the end of filming, maintaining a friendly atmosphere on site.

In the clip below, Song Joong Ki shoots a scene where he collides with a child in the street while running from those who are chasing him. Not only does he check the smoothness of his movements, but he also checks on the child actor after shooting the scene and makes sure he’s okay. Song Joong Ki’s leadership and sincere concern for the cast members, regardless of their roles, shine through the filming location.

Reborn Rich is available to watch in the Americas, Europe, Oceania, the Middle East and India on Viki, and the drama will also be available in Singapore, Malaysia, Hong Kong, Philippines, Thailand, Indonesia, Myanmar and the Middle East at www. .viu.com or in the Viu app.

Watch the drama with subtitles below!