Who took part in the Queen’s coffin procession from Buckingham Palace to Westminster? 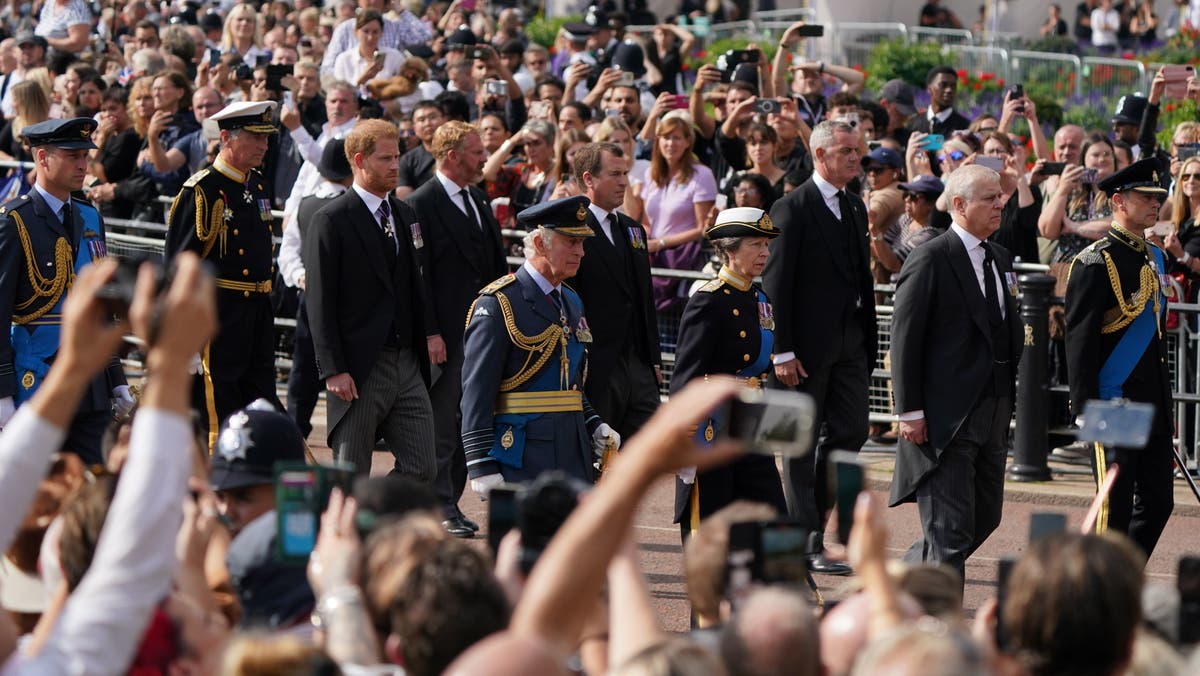 The Prince of Wales was taking care of his brother the Duke of Sussex as they honored the Queen by following her coffin pulled on a tow truck to a lying state.

William and Harry were standing side by side – unlike the funeral of the Duke of Edinburgh when their cousin Peter Phillips was walking between them – in the second row of the procession, with Harry in the center, William on the right, and Mr. Phillips on the left.

Despite their long rift, the brothers reunited as they welcomed mourners with their wives over the weekend in Windsor, two days after the Queen’s death.

The procession evoked sad memories as they followed the coffin of their mother Diana, Princess of Wales, when they were only 15 and 12 years old.

Harry, who spent a decade in the armed forces, including two business trips to Afghanistan, was not in a military uniform unlike William as he is no longer a working royal.

In the front row sat, from left to right, the Earl of Wessex, the Duke of York, the Royal Princess, and King Charles – all in uniform except for the Queen’s disgraced second son, Andrew.

In the third row were Anne’s husband, Vice Admiral Sir Tim Laurence, the Queen’s cousin, the Duke of Gloucester, and the Earl of Snowdon, son of the Queen’s sister, Princess Margaret.

The Queen Spouses, the Princess of Wales, the Duchess of Sussex, and the Countess of Wessex traveled by car to Westminster Hall.

Part of the procession were also loyal members of the late queen’s staff, including the queen’s two pages and the palace steward, who walked directly in front of the coffin.

Pall Bearers are 10 ex-servants of Elizabeth II’s armed forces who were by her side in uniform throughout her reign, supporting her in her engagement and organizing her public diary.

Other dedicated members of the House of the deceased Queen, who assisted the monarch in her duties and in her daily life, passed in front of the tow truck that housed the Queen’s coffin adorned with the Imperial Crown.

Among them were her longtime chief advisor, private secretary Sir Edward Young, and the Keeper of the Secret Purse, Sir Michael Stevens, who is in charge of the monarchy’s finances.

There was also the controller of the Lord Chamberlain’s office, Lieutenant Colonel Michael Vernon, whose department administers state visits, garden parties, royal weddings, and funerals; and the Master of the House, Vice Admiral Sir Tony Johnstone-Burt, who ensured that Buckingham Palace operated like clockwork during the official and private entertainment of the monarch.

Key personnel were heavily involved in the days since the Queen’s death, implementing the London Bridge plans and supporting the new king and the bereaved royalty.

The processing was also handled by the director of the royal collection, Tim Knox, who looked after a large collection of royal art and treasures that the deceased monarch had entrusted to his heirs and the nation.

Behind the coffin, following the members of the royal family, stood Lord Charles, Earl of Rosslyn, Peter St Clair-Erskine.

He was responsible for the day-to-day running of Charles’ London residence, Clarence House, which is being closed as an office.

The Earl was also chief of royal security for over 10 years when he was known as Commander Peter Loughborough.

Beside him sat Charles’s chief adviser, Sir Clive Alderton, who had sent a letter to Clarence House staff on Monday warning of the threat of dismissal after the king’s accession.

Among the others, two horses and the royal treasurer attended.

The procession was led by the Metropolitan Cavalry, followed by a unit of the Life Guard, Cavalry Cavalry Regiments and the Grenadier Guard and Scottish Guard.

The group of bearers around the coffin is made up of soldiers from the 1st Battalion of the Queen’s Company Grenadier Guards.

The escort group consisted of two officers and 32 privates from the 1st Battalion of the Grenadier Guard, and apart from the coffin, also those carrying the puppets.